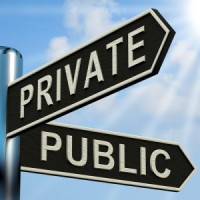 Arne Duncan, Barack Obama’s Secretary of Education said that Hurricane Katrina was “the best thing that happened to the education system in New Orleans.” The test scores of students in New Orleans did improve, though that was likely due to increased funding (by nearly $1400 per student) and the fact that the number of students living in poverty decreased significantly. In any case, the point is that Duncan ignored the suffering of hundreds of thousands of Americans as an excuse to privatize public education.

Not to be outdone by this, Betsy DeVos is all for using the suffering of millions and the deaths of tens of thousands to support privatizing public education throughout the entire country.

Taking Duncan one step further, DeVos has ignored Congressional intent for the millions of dollars set aside to support public schools that serve all children and manipulated its distribution with “guidelines” intended to dump more than originally intended into the coffers of private and religious schools.

Just how much damage can this administration do to public education, and the rest of the country, before they are finally replaced next January?

…I think it’s worth highlighting once again that we have a Secretary of Education who is not a supporter of public education or the people who work there, who is, in fact, far more excited about a privately-run system for replacing the institution that she is charged with overseeing. I can’t say that it’s highly abnormal, because the office has never attracted many people who really support public education, but it’s still weird that when public school teachers look up at state and federal authorities, they find people who are lined up against them. It’s a weird way to run a national education system.

Education Secretary Betsy DeVos is using the $2 trillion coronavirus stabilization law to throw a lifeline to education sectors she has long championed, directing millions of federal dollars intended primarily for public schools and colleges to private and religious schools.

The Coronavirus Aid, Relief and Economic Security Act, signed in late March, included $30 billion for education institutions turned upside down by the pandemic shutdowns, about $14 billion for higher education, $13.5 billion to elementary and secondary schools, and the rest for state governments.

Ms. DeVos has used $180 million of those dollars to encourage states to create “microgrants” that parents of elementary and secondary school students can use to pay for educational services, including private school tuition. She has directed school districts to share millions of dollars designated for low-income students with wealthy private schools.

“Am I correct in understanding what your agenda is?” [Cardinal Timothy Dolan, the Catholic archbishop of New York] asks.

“Yes, absolutely,” DeVos responded. “For more than three decades that has been something that I’ve been passionate about. This whole pandemic has brought into clear focus that everyone has been impacted, and we shouldn’t be thinking about students that are in public schools versus private schools.”

The comments are DeVos’ clearest statement to date about how she hopes to pull the levers of federal power to support students already in — or who want to attend — private schools. She has already made that intention clear with her actions: releasing guidance that would effectively direct more federal relief funds to private schools, and using some relief dollars to encourage states to support alternatives to traditional public school districts.

THE CUTS HAVE ALREADY BEGUN

Schools Will Need Help to Recover

The cuts have already begun, and they’re sobering. In April alone, nearly 470,000 public school employees across America were furloughed or laid off. That’s 100,000 more teachers and school staff who lost their jobs than during the worst point of the Great Recession a decade ago. At the Center on Budget and Policy Priorities, we are closely analyzing state budget gaps because we know the tremendous harm that can result from funding cuts.

Recently, Ohio Governor Mike DeWine, a Republican, announced plans to cut $300 million in K-12 funding and $100 million in college and university funding for the current year. Meanwhile, Georgia’s top budget officials told the state’s schools to plan for large cuts for next year that will almost certainly force districts to lay off teachers and other workers.

Mike Klonsky, in his Weekend Quotables series, posted this picture. The residents of Flint, Michigan, while the state claims that the water is now ok, and 85% of the city’s pipes have been replaced, are still scared to drink their water. Meanwhile, some Americans are more concerned with their appearance than human lives…insisting that wearing masks make them “look ridiculous” or demanding haircuts. 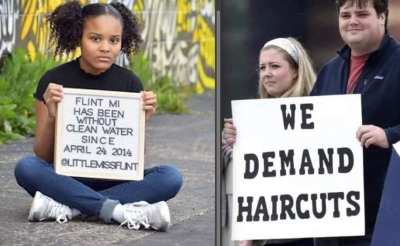 Dana Goldstein, the author of The Teacher Wars, compares two different schools facing the coronavirus pandemic requirement to close. This is a clear description of how money provides more opportunities for some children than others.

Private school students are more likely to live in homes with good internet access, computers and physical space for children to focus on academics. Parents are less likely to be working outside the home and are more available to guide young children through getting online and staying logged in — entering user names and passwords, navigating between windows and programs. And unlike their public-school counterparts, private school teachers are generally not unionized, giving their employers more leverage in laying out demands for remote work.

In the Public Interest has gathered research on online education, revealing a track record of poor academic performance, lack of equity and access, and concerns about privacy. Take a look…

Coronavirus has put the future of K-12 public education in question. School districts, teachers, and staff are mobilizing to provide students with online learning, emotional care, meals, and other support. Meanwhile, online education companies—with the ideological backing of right-wing think tanks—are aiming to further privatize public education and profit off of students.

It goes without saying that online education can’t replace the in-person teaching, social interaction, and—for many students—calories that a brick-and-mortar public school provides. However, that isn’t stopping some from arguing that much if not all of K-12 education should stay online after the crisis.